J writes:
If the Amish ever make a cell phone I am going to be the first in line because having experienced their soft pretzels just now I can tell you that they do everything better, not just houses and furniture.

I’ve passed by the Miller’s Pretzel Stand in Reading Terminal Market on numerous occasions but never stopped. Today I made a special trip to try their jalapeno cheese pretzel dog because I wanted to compare it to the Auntie Anne’s version.

I am adding Auntie Anne’s to the list of stores that shouldn’t be in business anymore because not only is their version more than a dollar more expensive ($3.87 vs. $2.75), it is much much smaller. If you control for size, which does matter, the Auntie Anne’s version is almost twice as expensive.

Couple of observations from Miller’s:

First, Amish women don’t react to being called babe. I didn’t call her babe, the guy in front of me did. I suspect he was testing her the way crass American tourists yell at those British palace guards in the funny hats to see if they’ll react, but he must have been disappointed. She just rang up his order and said, “have a nice day.”

Second, the cheese and the jalapeno are in the hot dog, not in the pretzel. It’s a matter of preference, I suppose, but you should be aware going in.

Finally, the hot dogs are enormous. This is not a snack, this is lunch. In a moment of juvenile humor while waiting in line I pondered the idea of being served a giant phallic symbol by a sexually repressed minority who, while I would not have been crass enough to say so, was a babe. 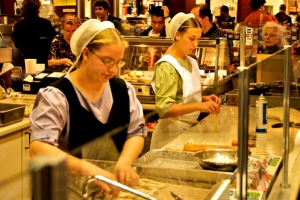 My sister’s sister (who is pregnant and was at the time) ate a whoopee pie from an Amish farmer’s stand at Cowtown Rodeo and cried because it was so good.

This entry was posted in Uncategorized. Bookmark the permalink.